Koa Kafe goes to the “Strawberry Fields of the Philippines” 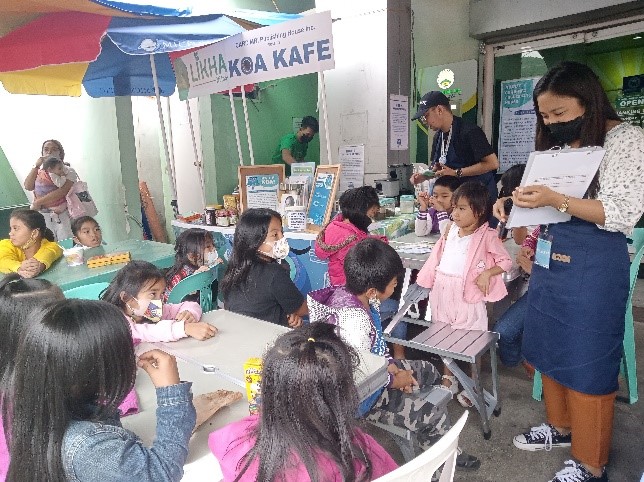 The event’s main objective is to bring the institution’s publications closer to CARD’s clients and their families through various activities. The event is part of “Araw ng Pagbangon,” a program of CARD Mutually Reinforcing Institutions (CARD MRI). During the event, attendees were given free coffee, juice, and indomie noodles from Mga Likha ni Inay, a marketing arm of CARD MRI.

All throughout the day, CARD Publishing’s books and magazines were put on display for the attendees to enjoy and read. These include publications like Sulong, the official newspaper of CARD MRI; History of San Pablo: Reviewed, Rewritten, and Retold, a local history book; CARDventures, a travelogue; and “Ang Magic Alkansya ni Carding,” a storybook on basic financial literacy.

Meanwhile, the storytelling activity was participated by 17 children featuring “Ang Lapis ni Anya”, a storybook that shares the importance of managing time wisely. Koa merchandise such as notebooks, stuffed toys, and other school supplies was also given to the participants.

Since it was launched in March 2022, Koa Kafe has flown to Bay, Sta. Cruz, and San Pablo City in Laguna; Vigan City in Ilocos Sur; Balud in Masbate Province; Tagum City in Davao del Norte; Sta. Elena in Camarines Norte; Iba in Zambales; and Iloilo City in Panay Island. It has catered to more than 1,000 individuals.

Koa Kafe is set to fly in Tacloban City, Leyte in November 2022.