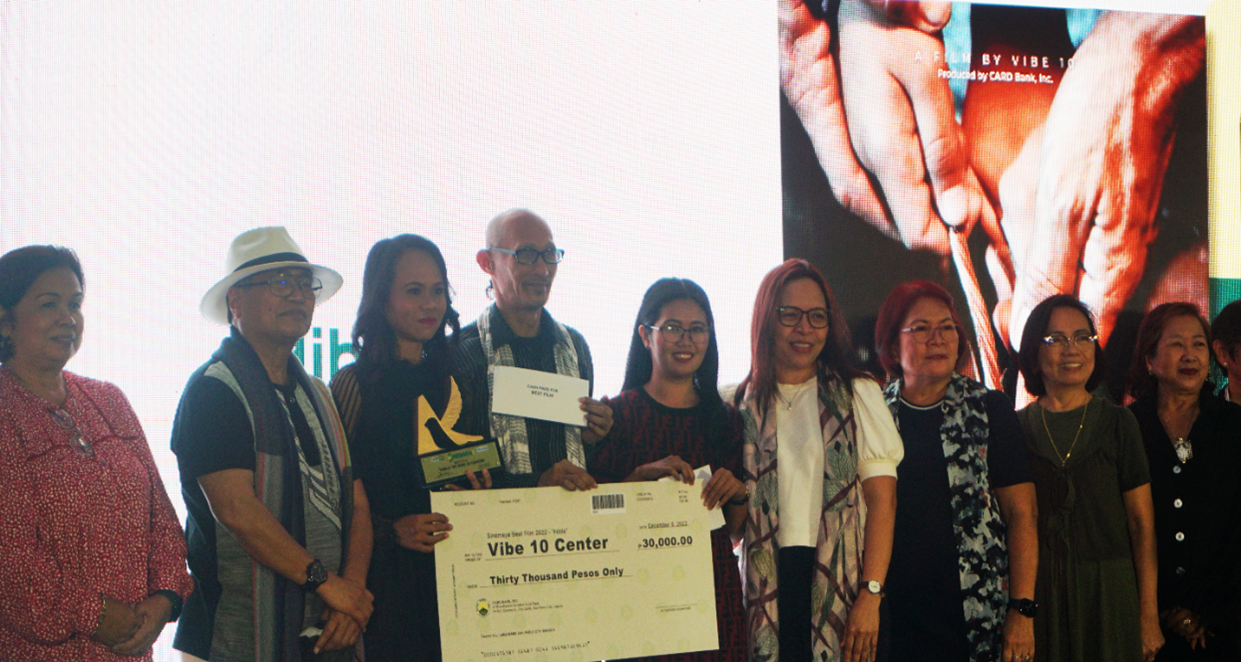 SineMaya was derived from the words “SINE” which means cinema house and “MAYA”, a national bird (MAYA PULA) until 1995 that symbolized the Filipino people who are humble, frugal, generous, and survivors. It also symbolizes creativity, community, simplicity, and empowerment similar to CARD MRI’s mission and core values.

The program aims to tap the creativity and artistry of CARD clients and their families in the field of filmmaking. They attended trainings in scriptwriting and video editing in support of the production of their short films and to make them more compelling to their viewers.

The theme for this year’s film fest is Magkaugnay ang Lahat (All is connected), let the participating entries produce short movies inspired by their real-life scenarios and the ugnayan (connection) they built within their families, communities, and with CARD MRI.

“CARD MRI and its clients and communities are all interconnected in weaving stories of success. We are building each other in creating wonderful narratives in the fight against poverty. We always acknowledge that the success of every family we are serving is the success of the whole organization,” said CARD MRI Managing Director Aristeo A. Dequito.

After a series of deliberation, here is the full list of winners of the SineMaya: CARD MRI Community Short Film Festival.

“CARD MRI’s Sinemaya proved that regardless of age or social status, we can aim to do bigger things. We are grateful that clients like us were given the chance to showcase our talents and skills aside from being microentrepreneurs,” said Jacqueline O. Estrella, the CARD Bank client who wrote and directed the Best Film Awardee.

Meanwhile, Venezza Gonzales’ Tulay grabbed the Managing Director’s Choice and the 3rd Best Film. The film also won the Best Screenplay by Venezza Gonzales. Depicting the core values of CARD MRI, the film also won the CFISHES Award. Joneth Enriquez who acted as a granddaughter who supported the journey of her lola towards recovery won the Best Supporting Actor in a Female Role. With the support of CARD staff and officers in the production of their center’s film, CARD, Inc. Lupon 2 Unit bagged the award as the Most Supportive Unit.

In addition, CARD MRI is also known for its holistic approach to development by providing various programs needed by the CARD MRI community to improve their quality of living. This effort of CARD MRI was shown in several participating entries, thus, recognizing these short films as the community development awardees. Below is the full list of winners for the Community Development Award:

After the film showing at SM Cinema, the viewers voted for Tinig ng Tahimik by SK Baclig as the People’s Choice Award.

“For us at CARD MRI, we view the film fest as more than a platform to showcase our clients’ talents. It’s about tapping their endless potentials so that they can escape the cycle of poverty. Their films depict the reality of their lives and how they journeyed towards empowerment,” said CARD MRI Founder and Chair Emeritus Dr. Jaime Aristotle B. Alip.

Meanwhile, CARD MRI Publishing House President Marilyn M. Manila promises a bigger film fest in 2023, “With the impact of this program, we are looking forward to enjoining other MFIs in this initiative. By next year, we will be opening SineMaya to clients of other MFIs so we can collectively communicate our advocacies to a wider audience.”

SineMaya aims to share in its next editions the stories of not only the communities of CARD MRI but also the impact of the microfinance industry on other Filipino families. This is to share the impact of the industry on nation-building. SineMaya is organized by CARD MRI Publishing House, a publishing company under the CARD Mutually Reinforcing Institutions. CARD Publishing was established in 2017 with the goal of creating stories that inspire communities to join CARD MRI’s mission of poverty eradication.