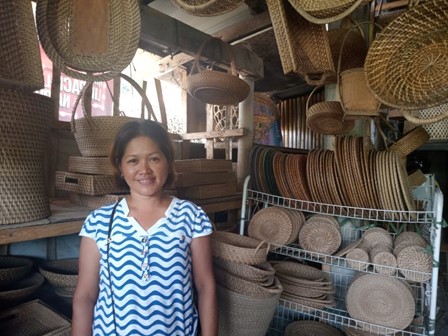 Marie Fe Lee from La Union is a human resource management graduate (HRM) who worked at the front desk, where she met her Korean husband. They got married in the Philippines but later moved to Korea. Unfortunately, her husband died before they had their first-year anniversary. As she was not yet a Korean resident at the time, she decided to return to the Philippines.

A year after she came back to the Philippines, she established gowns and catering services. She chose this type of business based on her background. She also built a sari-sari store in front of her house because she noticed that the space in front was large enough to accommodate another source of income, especially since they are near the road. Her gowns and catering services lasted 11 years, but due to the lockdowns in 2020, she was unable to find potential customers.  She then shifted in handicrafts business.

It all started when a peddler offered her handicraft items, which she took and displayed in front of her sari-sari store. A doctor noticed the items and became her first customer. The doctor encouraged her to continue selling handicraft items. Coffee tables, trays, fruit stands, serving trays, baskets, and other household items are among the products that she sells. Some were made entirely of labtang baging, while others were a combination of labtang and bamboo.

Like the woven products she sells, there is one thing that binds her business together. Like Marie Fe, the ten families that supply her with handicrafts are mostly CARD Bank clients. The feedback that she heard about the microfinance-oriented rural bank encouraged her to join. Now, she has been a client of the institution for three years. already and she must say that it was indeed a good decision.

She began with a PHP3,000 capital until the business grows and now, she already has acquired two shops. She considered the expansion of her shop to give more space for her customers. Although her income from handicrafts is lower than her income from gowns and catering services, she can say that her new business has given her peace of mind. Currently, Marie Fe solely manages her business however she is already exposing her son on how handicraft business operates.

In five years, she is aiming to make more people become familiar with her store, and she is hoping to establish her own name in the field of handicrafts.